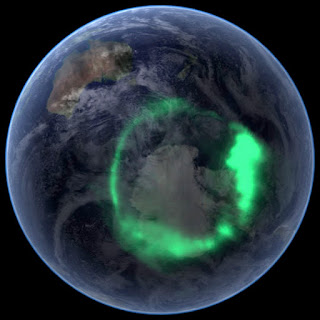 This week, PhD Student Giang Nguyen talks about his recent paper discussing lava planet K2-141b. This planet's extreme atmospheric conditions set up a stable ring of clouds just beyond the edge of a large lava ocean centered on the subsolar point. Examples of other large stable annular features on planets include the auroral ovals of the Earth and Jupiter. The photo above was captured by the Imager for Magnetopause to Aurora Global Exploration or IMAGE satellite.

A few weeks ago, my paper on modelling the atmosphere of K2-141b was published. There was a press release and quite a few news organizations picked up on the story such as CNN and CBS. The public seemed excited by the idea of a scorching planet half engulfed in lava with supersonic winds and molten rock raining from above. Many have started to call K2-141b Mustafar, a fiery world Darth Vader calls his home as envisioned by George Lucas. Others, correctly so, shared how grateful they live on this blue Earth rather than K2-141b. Although K2-141b is described as a hellish landscape, from afar, I think there’s something to be admired from our little lava planet.

In essence, when looking at K2-141b from afar, we should see a ring of clouds around the sub-stellar point. And if you adjust your perspective such that the star is directly overhead on K2-141b, the ring faces upward which makes it a halo! K2-141b has a halo of clouds which is made up of quartz-based gems, how cool is that? This should be the case for other lava planets as well where the planet’s crust, and atmosphere, is dominated by oxidized silicon. Although with this analogy, Earth also has a cool “halo” which is the aurorae (Borealis and Australis). 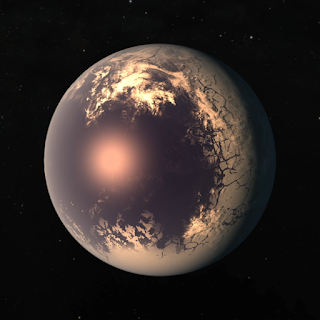 An "eye-ball" planet in which the heat of the star creates a large ocean centered on the subsolar point. In the case above, the working fluid is water and the solid ice, but if you get close enough to the parent star, rock will also melt and form an ocean, ringed by clouds. Image Credit: NASA/JPL-Caltech https://commons.wikimedia.org/w/index.php?curid=56552366


For atmospheric modelling, the cloud halo acts similar to the “eye-ball” icy Earth scenario where the sub-stellar point of the icy Earth is an ocean that slowly freezes as you move further away. The middle circular ocean resembles an eyeball that is surrounded by an icy surface that has a much higher albedo. A reflective cloud halo would behave similarly to ice as it reflects more light than then bare magma ocean of K2-141b. Although this is a classically hard problem in climate modelling, we can study some limiting cases that arise from K2-141b’s halo. The albedo of the clouds can be measured which helps us determine cloud properties such as particle size and back-scattering efficiency (dependent on cloud composition and crystal geometry).

Now that my work on K2-141b has expanded to include radiative transfer and cloud formations, I am also collaborating with more scientists. Among them are astronomers from the Max Planck Institute, climatologists from Oxford and Chicago. Their expertise on modelling and observing exoplanets will help to make much more accurate descriptions of the K2-141b’s meteorology, surface composition and interior dynamics. While what we predicted about the weather on K2-141b is frankly mind-boggling, I believe the planet has even more interesting things to tell us.